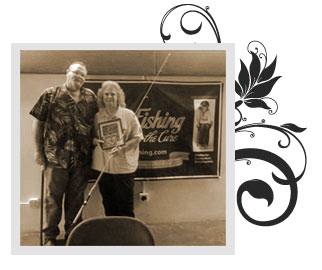 I have struggled my whole life. Many things have happened to me that really tested my strength. My first husband and I adopted a baby that we knew was terminally ill and he passed away at the age of 3 ½. My first husband passed away from a massive coronary while at work. After that I felt life had ended as I had lost my entire family.

I sort of turned into a robot. I ate, slept and went to work. This went on for eleven years. There were times I had fun. I went to the movies, went to dinner, had a few dates, but the sadness was always there. My faith carried me thru this.

One night in 2003 I met someone that “turned my head” and made me want to live life again. I was thankful for this feeling and this man that gave me these feelings of life. I can’t explain it but from the very beginning I felt we were supposed to be together. We were dating, having fun, and starting out real well. We were by each other’s sides and we had a lot in common so, here is the rest of my story

Rusty Plocheck asked me to marry him on July 4, 2003. On October 8, 2003 he had a heart attack. We got thru this and on November 8, 2003 we married. In December 2003 I was told I had breast cancer and I had a mastectomy at that time. My chemo started in January 2004 and I was introduced to a great set of Doctors. I had really long curly hair and I remember being upset that I was going to lose it all during the chemo. This was sort of my trademark and had been for many years. After chemo, my hair was the last thing I worried about as you will soon see. In February 2003, I was sent for a test by my Oncologist, Dr. Carolyn Aks. The test came back that I had an ascending aortic aneurysm that needed to be repaired via open heart surgery. This would make my second open heart surgery as I had to have a valve replaced in 1993. Unfortunately I wasn’t able to have any type of surgery due to the chemo and I couldn’t stop chemo so they just had to monitor it and pray that I didn’t rupture. In April I got real dizzy at work and had to be transported to the hospital via ambulance. Once there it was found out that I had a brain tumor behind my left eye that was growing into the motor control section of my brain and it would have to be removed. Once again, no surgery due to the chemo. Yes you read it right I was still working in between chemo treatments, for anyone that has had chemo you know this is a feat in itself.

I remember my last chemo treatment: I was driving to the Shelton Building on Pine Street and I was having a real hard time making myself go into the parking lot so I pulled into a space across the street and sat there holding onto the wheel of my car. A policeman came up and asked me if I was ok and I explained the situation to him. I told him I was trying to get the courage up to go since by this time during the treatments, I had my head in a bucket during the last three treatments. I was in the hospital after the last four treatments. He asked if I wanted him to take me over and I told him no, I needed to drive myself or I would not have passed this test. My last chemo was May 25, 2004, my husband’s birthday.

In July 2004 we went to Dallas to Zale_-Lipsey Hospital to see Dr. Bruce Mickey, my brain surgeon. After an MRI and blood work, I underwent surgery for the tumor. A benign tumor was removed the next day by Dr. Mickey and his excellent staff. I was really scared because I did not know how this would affect me in my everyday life. Fortunately things turned out ok and I recovered from this fully. We did not have anyone to help us with this financially and things started to fall apart from that end.

After I recovered from the brain surgery, in September we made a trip to Houston to see Dr. Joseph Coselli, a highly respected and world renowned heart surgeon. He invented the “Coselli Sheath”, a device to repair aortic aneurysms. We waited in his office an entire day to see him. My appointment was at 8:30 that morning and I finally got to see him around 6 that evening. The next morning I had surgery. I recovered for two months and was released to go back to work. We were devastated from all of this as I had lost my insurance but we face it the best we could and moved on.

After being released I returned to work and was taking radiation also. I remember it made me very tired and weak but I kept my head up and moved forward. I worked at my regular job almost a year and one night I started bleeding. I had to have a total hysterectomy as I had 16 tumors on my ovaries. These turned out to be benign thankfully. During all of this my husband had to have 2 stents in his heart and finally had a bypass done. Through all of this we did not ask for any financial assistance from anyone. We had to have these procedures done, even though we didn’t have the money. I was put on medication for 5 years and made regular visits to my Oncologist and her staff of nurses. I will cherish them forever!!

My family played a big role in my recovery and my husband was there by my side the whole time although it was a huge step for him too.

To be honest with you, I never knew about organizations that would assist us with all of this financially… Little by little we saw more people and business looking into this area to help and I must say we would have given anything to have had help with this.

I give all a great deal of thanks for all the progress that has been made in the area of breast cancer awareness and thank your for the invitation to the SurvivorFest.