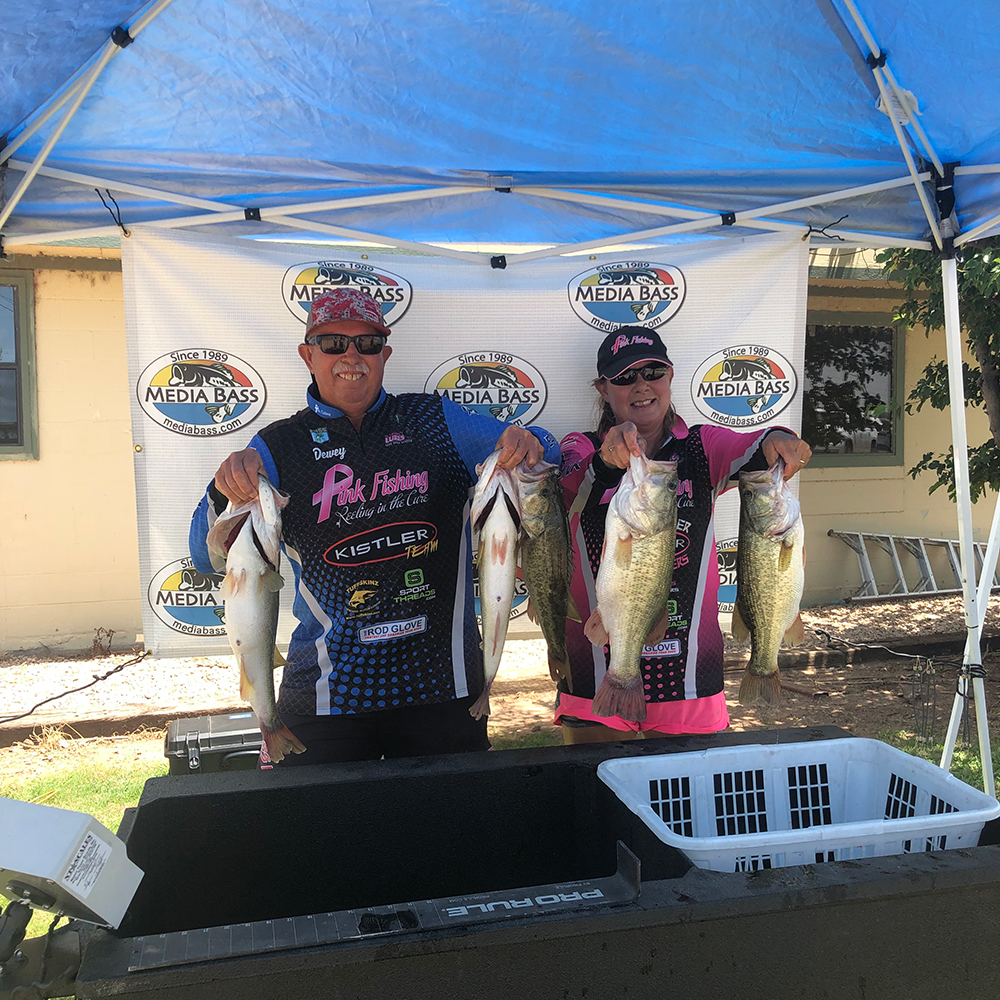 Board of Director, President 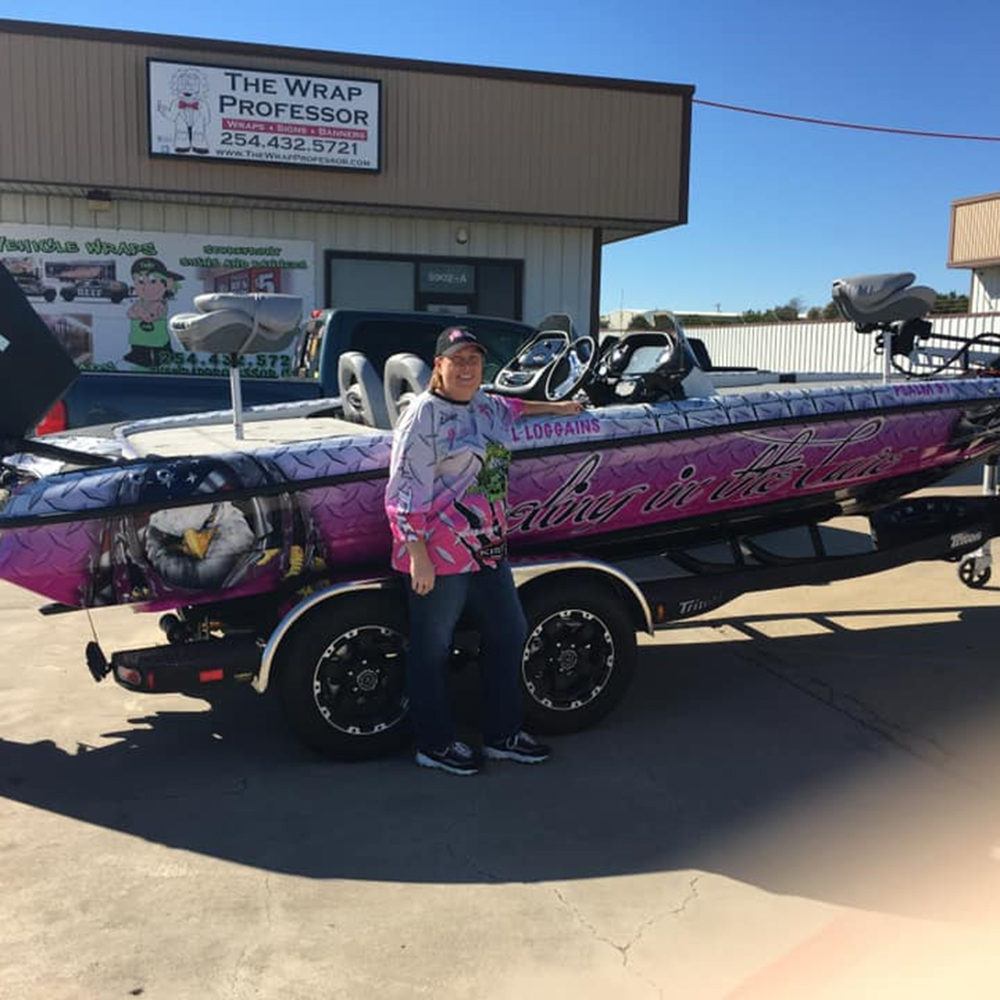 Board of Director, Treasurer

Co-Owner of Pink Fishing, Inc., Tournament Director for Reeling in the Cure Bass Tournaments, Brand Ambassador for the NBCF. Leisha grew up hunting and fishing in Northern Arizona where she lived until she married her High School Sweetheart, Earl, in 1983. She traveled the world with her Best Friend as he protected our Freedoms during his career in the Army until they were docked in Copperas Cove in 1997. In 2007 they competed in “Fishers of Men”, were Male/Female Anglers of the Year, qualifying for Regional’s each year, and National’s twice. 2010, they competed in “Faith Angler Network” claiming Male/Female Anglers of the Year in 2010, 2012 and 2013. They also have and are competing in the TuffMan Circuit, Central Texas Division, have previously qualified to fish the Championship four times, placing 4th in one of the Championships. They are back fishing with the “Fishers of Men”, Central Texas Division, and Leisha plans on joining the Women’s Bass Tour in 2021. “When your hobby becomes a passion and your passion becomes a ministry!” 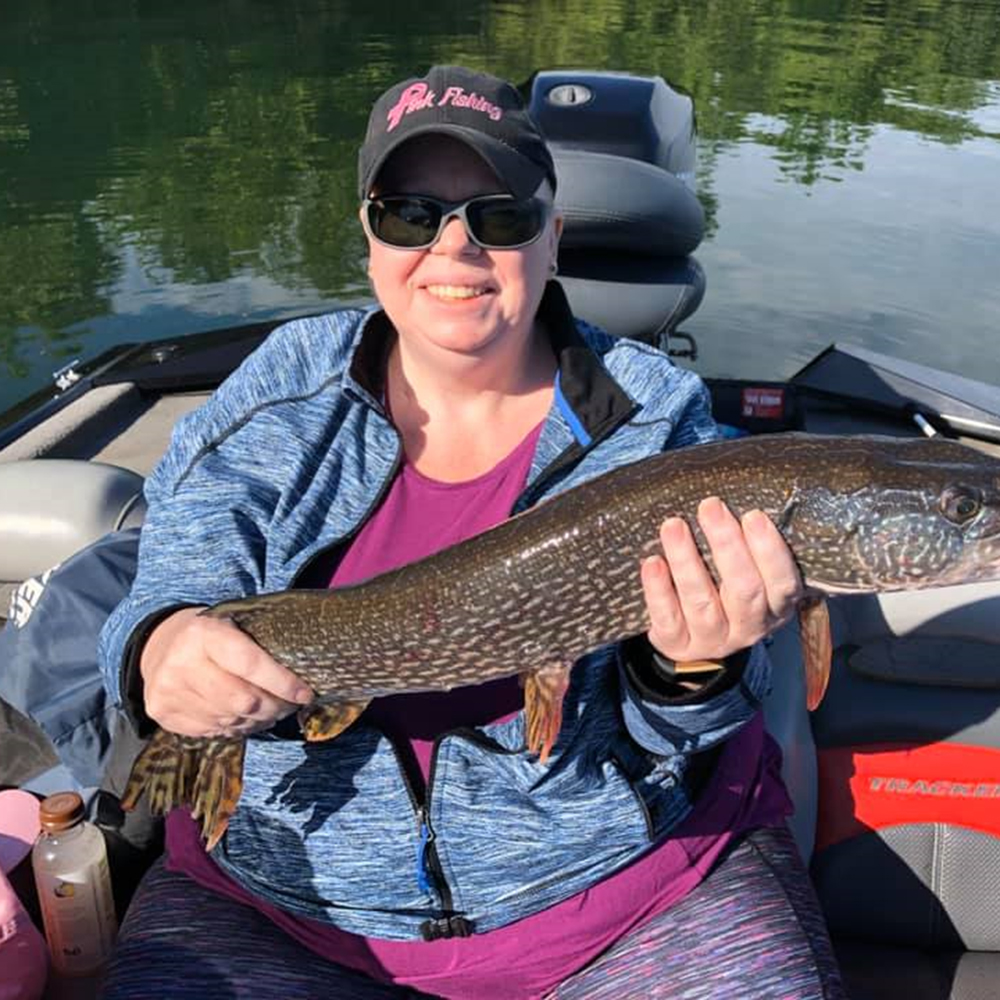 Board of Director, Secretary

Pink Fishing Pro Staff, Reel Inspiration sharing my journey through Breast Cancer. Served 4 Years on the Board of Director’s for Bucks County Performing Arts Institute, Grant Writing Committee. Member of Pink Fishing since 2013. 30 + years in Management, 10 years working with non-profit companies in a management role. “Fishing for me gives me peace, and solace. Fishing with my best friend my husband, David, is priceless. We connect with nature and each other and share a passion for the sport. Who am I? Friend, Colleague, Wife, Warrior, Fighter, Thriver… my life was forever changed. I made a pact then and I stand by it today… 1 Day to cry, 1 day to ask Why and then we fight… That’s what we do….” 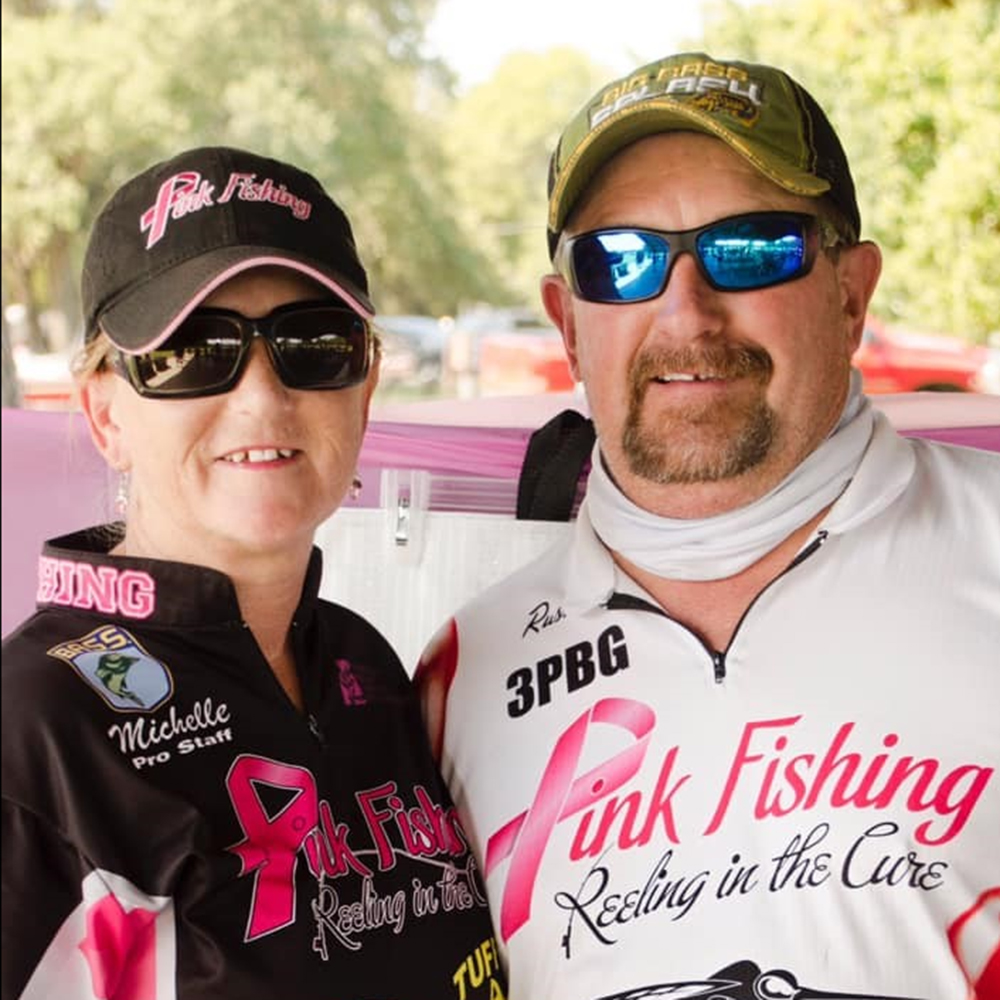 Pro Staff Director and one of the founding members of Pink Fishing, Community Ambassador participating and organizing charity events, raising awareness, CAST for Kids boater. Russell and Michelle are from Merkel, Texas, married for 25 years, have two sons, one daughter, and four grandchildren. They love to fish; “it is an honor to wear the Pink Fishing logo while doing what we love”. 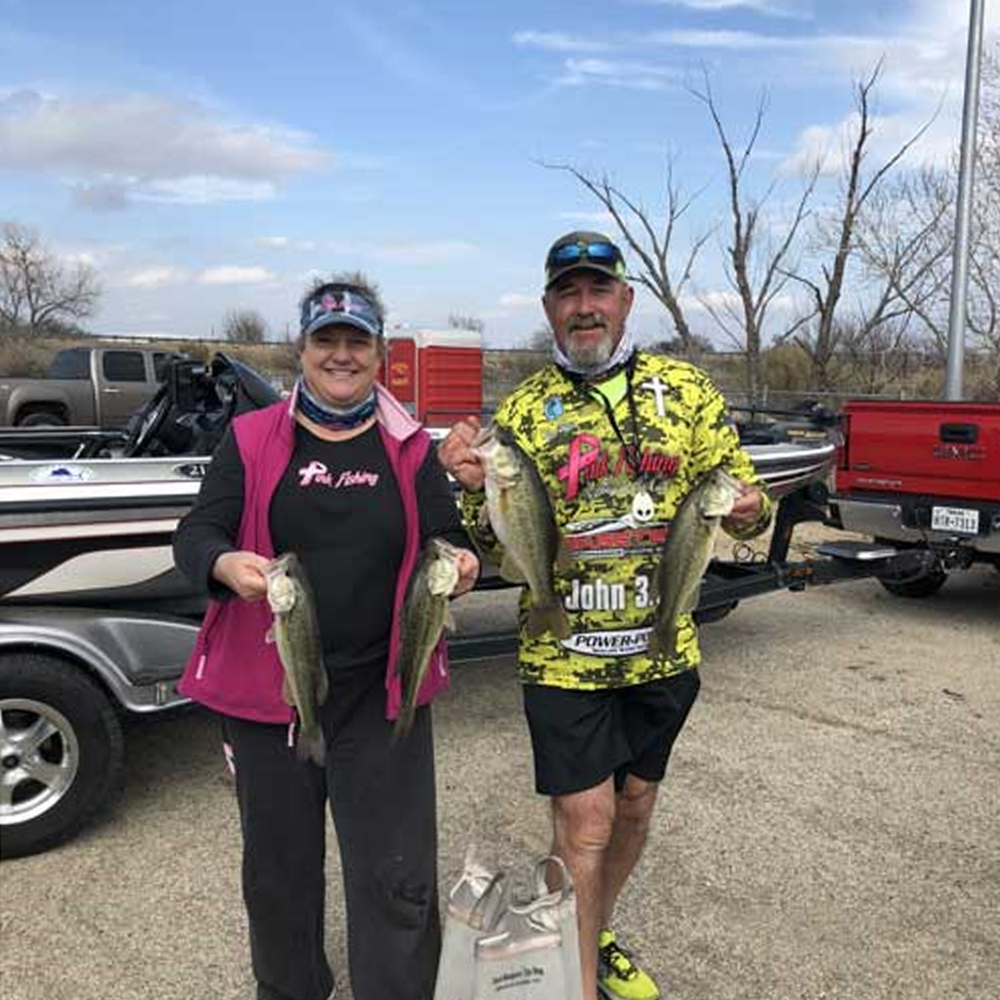 Brandi became a Pink Fishing, Reel Inspiration in 2012 when she was diagnosed with breast cancer and has continued to work with Pink Fishing. She has worked the Pink Fishing booth at the 2013 Bassmaster Classic in Tulsa, OK and has continued to promote Pink Fishing at Bassmaster Classics in Houston, TX and Knoxville, TN, B.A.S.S. Nation National tournament in Anderson, SC, and the Toyota Bonus Bucks tournaments in Branson, MO and Florence, AL. During all these tournaments, she has visited personally with the pro fishermen and BASS officials. She and her husband Frank have been featured in many interviews/commercials supporting Pink Fishing and breast cancer awareness. 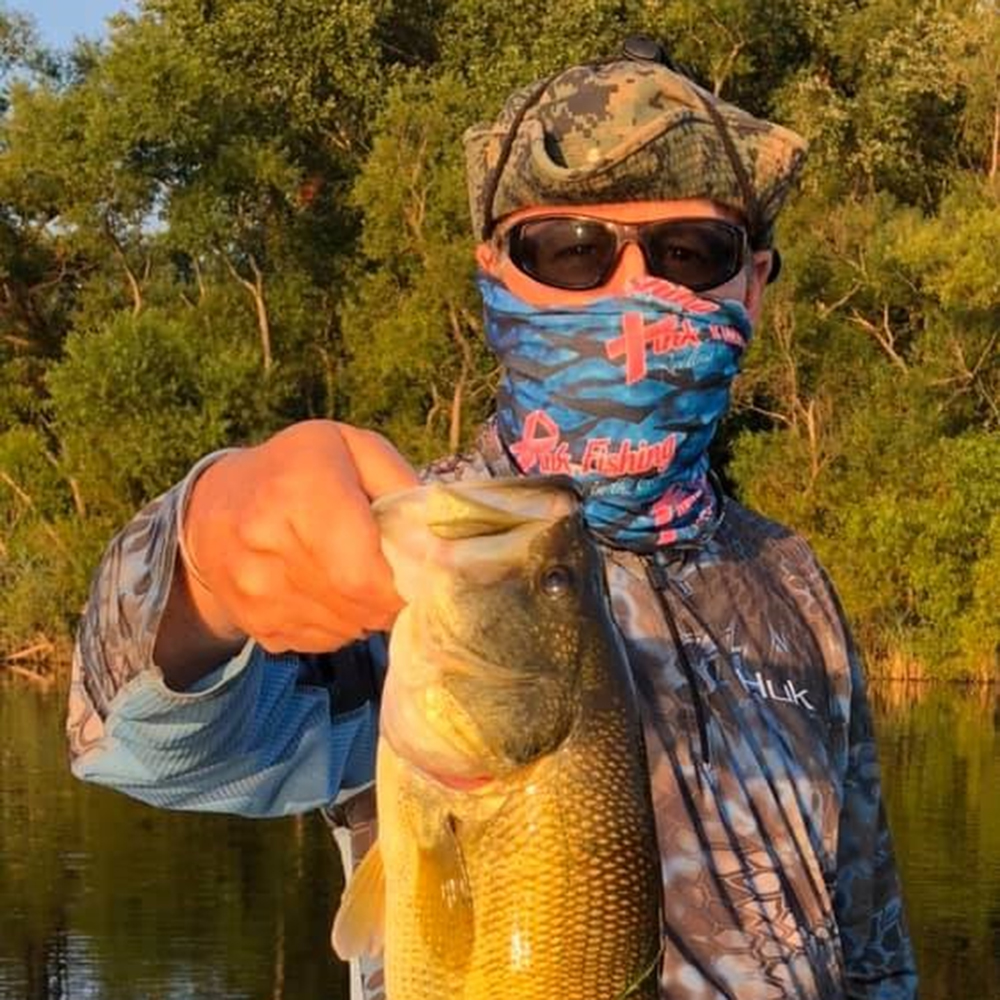 Board of Director, Membership Director

Pink Fishing Pro Staff, Reel Inspiration sharing Kelley’s journey through Breast Cancer, Co-Chair for Reeling in the Cure, Down the Shore and Carp and Catfish fundraising tournaments for Pink Fishing, Inc., participated in trade shows, 4th Degree Knight for the Knights of Columbus holding positions of Warden and Chancellor. Member of Pink Fishing since 2013. David has been fishing for as long as he can remember and being raised in a military family, has allowed him to fish all over the world. He enjoys wildlife photography, building fishing rods, tying flies, and mixing sound for Cross Roads inspirational rock band.