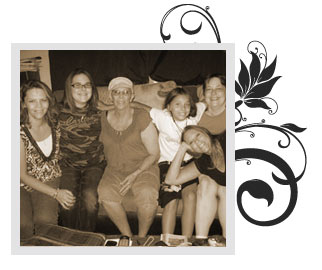 On June of 2008, my precious mother was diagnosed with breast cancer. I still remember the call, when she phoned to tell me. I was at work and I just lost it of course that would be expected by anyone. My mother is a great mother. I want to have her around a lot longer. God willing we will have her for many years to come. She has three daughters, many family members and many friends that are praying for her. She has a great support group in us all. My sisters and I do our best to be there for her when she has her treatments. It is our turn to take care of her. She had six doses of doxitel and taxaterra. She started her chemo in August and ended in December. She went into remission for approximately three years. Her tumor counts were on the rise and the doctors attributed it to her being around second hand smoke. She was scheduled for a chest scan in May 2011.

Prior to having her chest scan she got really sick. Her gall bladder was sick and she had to have it removed. During her tests and sonogram, it was determined that her liver looked as though the cancer had metastisized to her liver. I, the nosy daughter, immediately called my mother’s cancer doctor (Dr. Melnyk) , by the way in my opinion is the best cancer doctor there is. I informed his nurse of the outcome of the sonogram. My mother was not to happy with me. It was not the first time I made her mad and I know it won’t be the last time either. So, in May of 2011, she started on xeloda for six weeks. After no sign of improvement, Doctor Melnyk prescribed the “RED DEVIL” adriamyacin for two treatments. Well, still no signs of improvement. So, you know our spirits were not very high at this point. Then Doctor Melnyk says well we will try one more drug and if it does not work we will have to resort to the experimental drugs. (oh and by the way he stated that there are a lot of experimental drugs out there) Thank you research!!!!

So now she is on Taxol. Today November 30, 2011, her tumor counts have dropped and blood work looks great. She is on the uphill. Thank goodness. The key to recovery and a great life is never give up! Keep your spirits high! Most of all, live life to the fullest. So to everyone out there, say a prayer for everyone you know who is going through anything bad. Prayer is a strong medicine!!!