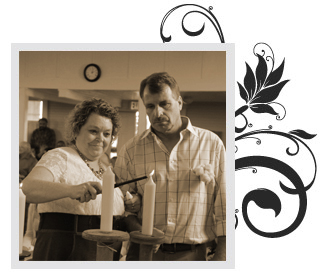 In March of 2007, my wife Elaine and I decided to sell our house in Mobile, Alabama and move to a mountain home in Arkansas. I was going to start another guide service at Bull Shoals Lake. I previously had a guide service in Mobridge, South Dakota on Lake Oahe.

Just two days before we closed on the house, my wife had her yearly mammogram appointment. Elaine went to the appointment and what she found out was a shock when the doctor said she had a lump on her breast. Turned out to be stage 4, grade 4, breast cancer. The cancer was caused by a dramatic change in estrogen from emotional trauma. The name of the cancer she has is “HER2/neu,” which is the fastest growing cancer.

I remember the look on her face, she was very scared, but not of dying, but of leaving everyone. We sat down and decided we would be ok, I told her I will do everything I could do to help her. I had to be positive and emotionally strong for her to get through this. Our kids were very supportive throughout the process. Our three children were a great help to her after the initial shock was over.

March to October, she went through radiation and chemo treatments. She did not take any days off from work. It was hard for her and very scary, but the other patients enjoyed when she came for treatments because she always had a smile on her face. She also became part of a group of letter writers who had, or currently have cancer called “Chemo Angels.” The kids or I went with her to her appointments so one of us could keep her spirits up and be positive and tell her it will be ok. The biggest fear Elaine had was when her hair started to fall out. When it got to that point to shave her head, Elaine and I cried, “reality really hit”.

The week before chemo was to start Ashley (middle child) took her to have her head shaved and buy a wig . We bought her different kinds of caps and scarf’s and when her hair came back, we donated her hats to another cancer patient. Elaine also volunteered at the Cancer Society for about eight months, as her health would allow it. After the five year mark with the medicine, she went to see the cancer doctor and he told her she would have to take Arimidex for the rest of her life and that she was 90% more likely to have another type of female cancer in the future.

With all the research done on “HER2/neu” breast cancer that it’s beneficial for her to continue for life. Like she said “I am here and I have my family and friends”, that’s all I care about! She is such an inspiring lady and determined to make her and other’s lives more enjoyable. She has made me a better person with watching her and how strong she is. She is a true cancer survivor.