I am David Zimmerman and this is my story…. 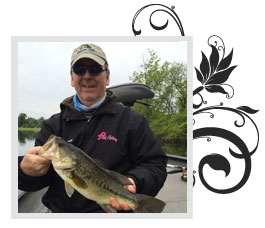 Hello…. Wow this is gonna be tough to do. I am David Zimmerman and this is my story … SO FAR…

On December 21, 2012 my world began to seriously fall apart…. OK wait lets go back a bit to get some more info.

REWIND to October 2012. My wife Kelley went in for her first mammogram. She had promised herself that she was going to get it done near her 45th birthday. When she did the doc told her that there was some dense shading and it was probably nothing… They scheduled a follow up for two weeks or so later. The date 10/28/12 for those of you in the Northeast coast you know what that date means. Hurricane Sandy was coming fast. The hospital that was right around the corner for us called and said they were going to have to reschedule as the storm was fast approaching and they wanted to get everyone out and home. I told her to tell them we could be there in 10 minutes if they could just PLEASE get you in. Truth be known, I was already not sleeping well as I was really concerned. I mean this was my one true friend in the world. They got us in and what was just shading had turned into a mass the size of a pea. Well that can’t be that bad… RIGHT? I mean it’s the size of a pea…….

The next three weeks were CRAZY. Several doctor’s appointments later we are in for a biopsy. The surgeon said as long as I stayed in the corner and did not move, I could stay in the room while this was done. After they got the sample we went into the doctor’s office and had a nice long talk about “the PLAN”. Now how anyone can go thru this by themselves is amazing to me. The first thing the doctor said was 90% of the cases she sees like Kelley’s end up being CANCER… HOLD UP… WHAT???? WAIT… REWIND… DID YOU JUST SAY THAT MY DEAREST FRIEND HAS CANCER????…. That was what I had heard so I repeated it and the Doctor said well there was a chance it was not. OK back able to breathe… at least a little bit. The plan was get in for a lumpectomy, get it out, do a little radiation on the area just in case… NO BIG DEAL (yea ok… that’s what you tell yourself anyway)

Flash forward 3 weeks…. Pre-admittance testing. Kelley goes by herself as I had a project at work that needed to be handled. She said it was no big deal. IN and Out. She was in and out as planed… on her way back to her office she got a call from the doctor saying she was concerned about her liver enzymes being a bit elevated….. so instead of staying at work she had to go right back to the hospital for a CT scan……. Scan showed 3 tumors on the liver… OK so now instead of being in for a lumpectomy it was going to be a liver biopsy. This was a LONG and painful process… Now we get to wait for the results…

December 12, 2012 at 10:33PM…. RRRRRRiiiiinggg, RRRRRRiiinnng… (God I hate the house phone ringer replaced finally last year). We get a call… the cancer is now METASTATIC, STAGE 4 and surgery is not an option….. CRASH my world just exploded. Now what?  Called family and friends filled them in, Never easy. Then I spent DAYS and nights fighting back the tears when I was around others. Had to keep that stone-cold face up. Don’t let anyone especially Kelley, know just how bad it was for me… after all I did not have cancer. I was the support person. Always there to listen, take notes, ask questions and keep everything running smoothly.

It was tough. REALLY, REALLY tough. UNTIL…March of 2013. Bass Masters Weekend Series Division 21 season opener. I had decided to fish ONE more tournament just so we could go down and fill in all our friends in on what was going on. I had decided that I would only fish local tournaments and give up chasing the BIG DREAM as Kelley was WAY more important than anything! So, there we are at the pairing meeting. Everyone was upset and said anything that we needed they had our back. My paring that day was Mike Kaminskas. I can remember thinking I really don’t want to be out here fishing. Mike ran straight across from the launch and said … “Here we are. This is where we are fishing today…”.

I can remember thinking this guy is a nut. We could still see and hear the launch going on. Ended up being great, can’t remember the numbers for the day. But we both had our limits by the time we went in for the weigh in. We did not talk much about anything other than fishing.

That weigh in would change me… Deeply… mentally, physically and spiritually.  Two of the young guns on the tour Justin Moffat, Kyle Young, and Danny Moffat Jr had gone out and got BRIGHT PINK knee high socks and prior to leaving the stage got the mic and said that while all of us fishermen/women were out fighting for our next bite. 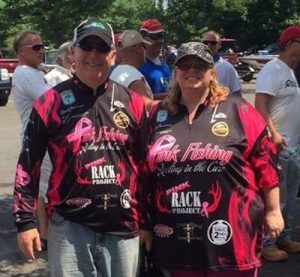 People like Kelley were fighting for their lives. And that we should all be aware of that. This happened before Mike and I got in and somehow, he put it all together. Next thing I know is he is asking me to come back up to his boat he had something for me. It was a hat and a brochure about Team Pink Fishing. He said check this group out. So, I did. I ended up fishing out the rest of the season. Kelley even sang the anthem both days that season at the Regional qualifier on the James River. When I heard that…. I knew that I had already won. Fish or No fish. (Ended up with 2 fish… lol Oh well NO BIG DEAL! I already won.)

And here we are today 7 years later, as I am writing this. Kelley is still fighting, 5 surgeries, lots of medication changes to get her cancer under control!!!

The GANG at Pink Fishing has been there through it all. I am very proud to be part of such a GREAT group. The family that has formed from all of you has made it a little easier to get through the down times and I cannot thank you enough!

In Closing… Don’t keep your feeling to yourself, find someone to talk to.  We are all in this together. Here to help!

; My Story’s Not Over Yet