When I was at Lake Amistad, Del Rio, TX for a tournament recently, I had the pleasure and honor of meeting Charles and Clara Tanner who shared their Reel Inspiration story with me. The Tanner’s only had each other, and when they see someone going through treatment alone, it breaks their hearts. “We see family members just drop their loved ones off for treatment, and that hurts us. We know they are scared and lonesome, and all they can think about is what’s going on in their body and will they be back for the next treatment.” We really wish more people had compassion for their family members going through this…this is terrifying!” Charles and Clara, what an inspiration you are, thank you so much for sharing your story! Carolyn Nichols

They only had each other… 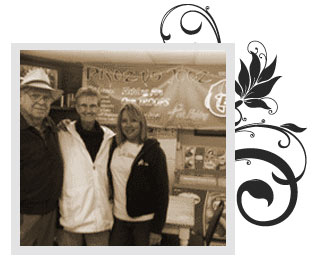 I consider myself a healthy, active person. I taught physical education for sixteen years and almost had a master of administration degree. I worked hard all my life which included building car washes with my husband Charles, and helping him run a cleaning business.

It was after we lost our business to a flood and my husband and I were managing an apartment complex that I begin to feel sick. At this time I was also working at a convenience store along with cleaning apartments getting them ready to rent. I could barely climb a flight of stairs before I would have to rest and could clean for short periods between resting.

Since we had no insurance I was going to clinics and never saw the same doctor twice. One day I felt a lump under my left arm and breast. I went to the clinic where they sent me for a mammogram and sonogram. Both came back negative so the P.A. said that nothing was wrong and sent me on my way. The lump continued to grow and I continued to feel worse. Finally the lump was almost the size of a grapefruit and the left side of my body was bright red as if I had been burned. Charles was dealing with his own emotions. He was riddled with guilt because they had delayed treatment, and he felt helpless as he watched his wife suffer.

It was at this point that I told my husband that I had to see a doctor or accept the fact that I might die. We made an appointment with the doctor we had seen before but could no longer afford the office visits. It took almost a month to get in. It was at this appointment that the whirlwind began. The doctor gasped when she saw my breast and side, then asked how long I had been this way. She said I had cancer and needed a biopsy. She called a surgeon at home and set up an appointment for the next day. It was called a plug biopsy and involved sticking a needle into my nipple to extract tissue. The surgeon told my husband it was the worst cancer that he had ever seen. We both just sank, We informed the surgeon that we had no insurance and no way to pay for the treatment. This was when God stepped in and let me know He was in charge. The surgeon told us that he was on the board of a charity that he felt would help.

I was sent to an oncologist for a second opinion and was told that I had stage four inflammatory carcinoma and four to six months to live. She did not think I could last through surgery. I faced the doctor and said, “I do not accept this diagnosis, only one person can tell me when I am going to die and that is not you.”

You must realize I was sixty-four years old, with no insurance and my only child was going to be married in Arkansas in a few days. God stepped in once again. The oncologist had an experimental drug we could use. The only thing was, it could either speed up the cancer or it would attack it and kill the cancer.

Knowing the seriousness of this situation I asked the doctors if I could go to my son’s wedding as my husband was to perform the ceremony. They told me as bad as I was – why not? While I was at the wedding the doctors got the treatment ready and means of payment taken care of. I had been accepted by Wings charity to pay for all my treatments. Oh! I forgot to tell you my surgeon and my oncologist were both on the board of directors for Wings.

I had a chemo port put in so my veins would not collapse during treatment. During my surgery and treatments my husband of 34 years was always there. As much as he hated doctors and hospitals, he seemed to love me more.

During my chemotherapy I was sick, I was tired, I did not think I could make it through this. My mouth had sores so I could not eat even if I wanted to. I had chemotherapy one day and it took most of the day and I had to take a shot the next day to build up the white blood cells. I almost lived on milk shakes and soup. I lost fifty-five pounds and all my hair as well as my toenails and fingernails.

Just before Christmas I woke up one morning and went into convulsions. My husband took me to the E.R. and called our pastor. I was given a total of four shots of morphine and four men were trying to hold me on the table as my husband and pastor were praying. Then God told me, “You pray!” I told Him either relieve me of this pain or take me and just like that it was over. Many tests were taken but all came back negative.

I worked hard to keep my diagnosis and prognosis from my family, but they found out, which made Christmas that year difficult. My son and his family, my brother in law and his wife and my stepdaughter and her husband came to see me. I really felt like they felt it would be the last time they would see me alive. That was the worst Christmas I can remember…it was like being at your own funeral. The best present was when my doctors told me I could have surgery the first week in January.

My surgery and recovery have been one miracle after another. My surgery was different. Something guided my doctor to an area of my body not believed affected by the disease, but what he found was another large lump chemotherapy had not touched – it was the origin of my cancer, and under normal circumstances, it would’ve been overlooked. I had asked God to guide the hands of my surgeon and He did.

Charles said he had no doubt that my faith and strength is what pulled me through. He said, “That Christmas when I thought I was losing her, her faith was so strong. Her body wanted to give up but she wouldn’t give in and it was that, that God saw in her and he performed a miracle.”

After a radical mastectomy I woke up hungry and went home the same day. I felt relief that it was over…disgust with the appearance of my body. It was almost a month after my surgery before I could bring myself to look in the mirror, and the first time I did, I started crying. I felt like a freak…to me, I looked grotesque. I had stages of depression and battled low self-esteem.

My drainage tubes were removed in one week and the staples were removed the next week. I still had post surgery treatments and have to take cancer preventive medication for the next two years. I have lost feeling in my finger tips and toes. I am in constant pain from three types of arthritis, including osteoporosis, and scoliosis, but I thank God for all He has done for me every day.

Everything that I have read and heard of is, you had to have a strong support system to survive. I found out all the people I thought were friends disappeared. No one from the church called or came by. The only support I got was those that God provided. When I needed someone to help me shower and change my bandages a lady who worked for the sheriff’s department came. When I needed food, a lady who owned a restaurant made soup for me and my husband. He would pick it up and bring it home. Of course my main support was my husband.

This all began in July 2007. I was sixty-four years old with no insurance and my husband had only a minimal job but God provided all my needs as necessary. Here I am in a new home when I desperately needed it. I was even able to keep my chemo-port through my treatment before my body rejected it. From being given a death sentence to being completely cancer free for four and a half years!

I have difficulty sleeping and eating, walking, standing or sitting and suffer from depression and at times I wonder why I went through this. Then I think I am able to do a lot. I am cleaning apartments, working in my yard, as well as keeping my house up. I believe the real reason I had this healing miracle was to inform others of God’s grace. I still have difficulty traveling

and have only seen my granddaughter twice and she will be two years old soon. I feel so much alone but God seems to get me through.