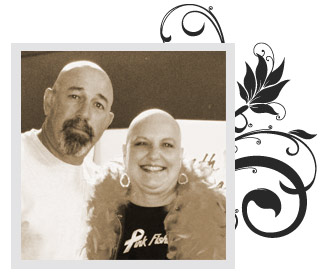 I’ve been fishing since I was a little girl. My dad used to take me and I loved it. Then I married Frank and we started fishing in local tournaments. We loved it. It seemed like every weekend we were on a lake somewhere in Texas. We worked just so we could fish. When our granddaughter, Mattie, was born we couldn’t wait until she was old enough to get her out on the water and stick a fishing rod in her hand. And just like me, she loved it.

On June 30, 2012 I was getting ready for bed and felt something like a hair on my left breast. When I wiped it away, I felt a strange knot under my skin. I just kept feeling of it. Finally, I got the courage to ask Frank to come feel. All he could say was to call the doctor on Monday morning.

I called the doctor on Monday and after making the poor receptionist realize she was not going to put me off until later in the week, I had my appointment scheduled for later that afternoon with the PA, Sandra. She confirmed what Frank and I already knew would be the next logical step. I had to have a mammogram so the doctors could see what was there. That was scheduled for July 10, the day before we were to leave for a karate tournament and vacation in Orlando. Sandra had requested that a radiologist be there when the mammogram was done so he could read it while I was still there. After the mammogram and sonogram (also requested by Sandra) I knew I was about to get some bad news. The radiologists asked me to wait after I was dressed. He told me at that time that he could tell it wasn’t a cyst and that the doctor would probably want me to get a biopsy on it. Of course, I wouldn’t get to talk to Sandra until we got back from Florida. But we decided to just enjoy our trip and we did!!!

The day we got back, I started making phone calls to the doctor’s office. I finally got the information I needed late the afternoon of July 18, and I had a consultation appointment for the surgeon the following Monday, July 23. During the consultation, he told me I could have a needle biopsy or one done by incision. Because the lump was in an unusual place and close to the surface, he said he might be able to get the entire lump if I opted for the incision. As a surprise to myself and everyone in my family, I did opt for the incision and it was scheduled for July 26.

I wasn’t expecting to hear any results of the biopsy for about ten days, but on July 31 at about 10:15, my phone rang with a number I wasn’t familiar with. It was Dr. Yost, my surgeon. He said he had enough preliminary results to let me know it was definitely cancer and I needed to come to his office as soon as I could. I was there with my mom about 30 minutes later. He explained to me that he could not give me much more information on the cancer because it was such an early reading, but he wanted me to be able to start making decisions on what I wanted to do as early as possible. Frank and I had already talked about all the possibilities and what options there were, so I knew I wanted to have a bilateral mastectomy. My surgery was scheduled for August 14.

We found out on August 23 that the lymph nodes were clear. That was some of the best news I had received in a while. But we also found out at the same time that I had triple negative breast cancer and would have to have chemo. My first appointment with my oncologist, Dr. Melnyk was set for September 4.

Frank and I went to the appointment and he explained so much more about the cancer and what treatment I would be receiving. It would be six rounds of Taxotere, Adriamycin, and Cytoxan (TAC). Dr. Melnyk is wonderful. He explained what each of the drugs would do and why I had to have them. I have never met a doctor that has such a wonderful personality and is genuinely concerned about each patient he has. My first round of chemo would be on September 19.

It was a very long three months with two major holidays included in the time, but on December 31, I received my sixth and final round of chemo. I am ready to start that next leg of this new journey and I know that I will have to make some changes in my lifestyle. But most of all, I am ready to get back on the lake and fishing with Frank.

I am so thankful for Pink Fishing and all they do in helping to find a cure. I would never have known about it if it weren’t for Pro Staff member and Asst. Director Michelle McGuire. We have been friends for more than twenty years. From the moment I received the diagnosis, she has been by my side. She has gone to appointments with me when my family was unavailable. She has been with me at each round of chemo to support me and my family. We have laughed together through tears. She has kept Frank up to date on treatment when he was traveling and not sure I was telling him the truth in how I was doing. She is a wonderful person and I am so blessed to have her on my team.