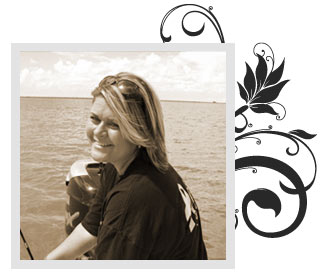 Fishing has always been very important to me. I was fishing with my papa as a little girl, and now with my husband and kid’s. Three years ago Breast Cancer Awareness became just as important to me. I was a wife to a wonderful husband that traveled for work. We had beautiful boy/girl twins that were almost 4, and I had just opened my own business. Having a strong and independent personality, I thought I could handle anything God had planned for me, but I quickly learned I was wrong!

In October 2006 my mom came to visit, and brought some Breast Cancer Awareness material for me to pass out to my female clients. I brought home the shower hanger that explained 3 steps to doing a self breast exam. Being a busy mommy, I put off actually doing the exam. My yearly physical with my OB/GYN was also in the month of October, so I asked my doctor when I should start getting a yearly mammogram. He smiled when he said I was too young to worry about it, and that age 35 was the usual time to start. He did a breast exam routinely, encouraged me to do a self exam, as long as there was nothing abnormal I had no need to be concerned.

Two months later, on December 21st, I was getting ready for a much needed girls night out with my sister in law. The little instructions were still hanging from my shower, and I decided to give it a try. It changed my life forever!

I started with the detailed instructions step by step, and I was surprised at how easy it was. As I was continuing, I found something that was about the size of a bean and hard. I was immediately sick when the only words to describe what I found was a lump. I asked my husband to follow the same way I did, and he confirmed that it was not my imagination. We discussed what my doctor had said, and there was nothing I could do till morning, so I continued with my plans grateful to have my sister in law to confide in.

The next day I called to make and appointment. With the holidays I wasn’t going to be able to be seen till December 28Th. Perfect! I could celebrate the holidays and put off dealing with it until after Santa came to visit. I wanted to wait to see what my doctor thought before telling the rest of my family. My husband had to return to work, so it was my job to make sure that our kids were having a wonderful holiday with our family. Christmas morning I was watching my 4yr old’s open their presents, and the reality of what could be going on with my body overwhelmed me. I was way too much for little miss independent to keep to herself. My family has always been supportive, and they were glad I let them know so they could be praying for me.

At my appointment my doctor confirmed my lump. We discussed family history, age, and other things it could be besides cancer. Within a couple of days I was scheduled for my first mammogram with a ultra sound if needed. I thought that I was just going to make sure it wasn’t anything to worry about, so against my mothers advice I went alone. The mammogram technician was actually someone that I had the pleasure of meeting in my shop, so she was very helpful and went above her duties to make me feel comfortable. After the mammogram she showed me the film, and explained that the test showed the lump I found on the left breast, but one on the right as well. She made a call for me to go immediately to the ultra sound. Looking at the screen of the ultra sound, I didn’t know what I was looking at, but the girl preforming it did. She explained that it would be read, and that I would make another appointment with my doctor to get the results. My heart was racing, and the tears began to flow. She saw the fear in my eyes, and mentioned that there was a doctor that was usually willing to go out of his way to look at the x-rays, and give the results. She told me to wait, and she would see if he was available. The doctor accompanied her back to the room after the longest thirteen minutes of my life. He could tell I was scared, but kindly explained that they looked like a fibroadenoma. They weren’t much to be concerned about, and quite common. Usually a result of too much caffeine and stress. I managed to laugh and admit I had a lot of both. He let me know the next step was to do a biopsy to make sure. The ultra sound technician was kind enough to write down what he said because she could tell I wasn’t in any shape to remember everything with all the tears rolling down my cheeks.

I immediately called MD Anderson, and they explained with that diagnosis I needed a needle biopsy. Being so far from home, I felt in my heart I could get the same thing done and stay closer to my family. I was able to get an appointment with an amazing surgeon. He explained there was no reason to have the fibroadenoma in my breast, and his advice was to do a biopsy to remove them completely for piece of mind. Amen! My husband agreed, so we were able to schedule the surgery the very next week, and it would soon be over with.

My surgeon went to talk to my mom and sister in law following the surgery. Being a nurse of over 35yrs my mom had a feeling things didn’t go as expected. He explained that they were sending the biopsy’s off, but he confirmed clear margins. As soon as they had the results they would call.

Because of the location of the incision on the right side I ended up getting a little infection from rubbing under my arm. I went to have it checked, and the results weren’t in yet, but not to worry they took time to process. I should have them at my next check up.

My infection was cleared up, but my doctor explained the biopsy results were questionable. The lab was unable to make a clear diagnosis, and they were being sent to MD Anderson for further testing. I was going to be waiting even longer for the results.

One month after the surgery I was called into the doctors office to go over the findings. They wouldn’t give much detail over the phone, so I was prepared for the worst. My mom was with me when I was diagnosed with pre-malignant breast cancer at the age of 29. It was not in the fibroadenoma’s. It was actually in the tissue surrounding them. A needle biopsy would not have found the pre-malignant tissue, and I could have had breast cancer within a short time.

There are always things we would do different in life, but this is one I wouldn’t have changed. I was lucky. I pray that what happened to me will encourage everyone that has a sister, daughter, mother, grandmother, or female friend to let them know that cancer is not typical. The “criteria” does not depend on age, medical history, or the fact most insurances will not cover yearly mammograms before the age of 35.

Many lives have been saved because of the men and women that are determined to find a cure. I am very grateful for the information available through Breast Cancer Awareness, and PROUD to be fishing for a cure!